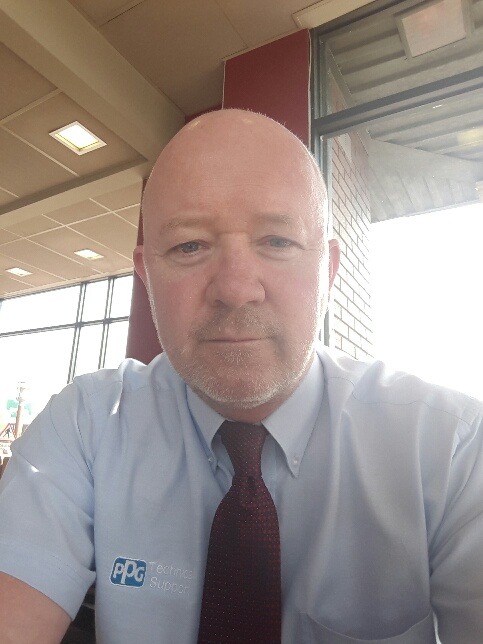 This month’s meet the team is focusing on David McFall, who works within a CT technical support role and has a massive impact on the FLEETWATCH® brand.

David began his career at Jennings, a Ford Dealer, as a paint sprayer at age 16. Whilst working as a paint sprayer he also attended Ashington college 1 day a week, and did this for 3 years, as he worked at Jennings for 6 years. Having gained vital experience David left Jennings to progress into a paint shop foreman sprayer role at Cochranes of Berwick and he remained here for 9 years, gaining experience of using ICI products. David then continued to gain experience working for Courtaulds coatings and Ixell before beginning his career with ICI in 1999. When David began working at ICI he began in a UK & Ireland trailer Builder Technical specialist role and when PPG took over he became the Northern Regions technical support from Fraserburgh to Sheffield and from Hull to Chester. David has now worked for PPG for over 17 years and he says he has loved every minute!

Within his current role David provides technical backup for all of Scotland and his biggest account is Gray & Adams, as well as other Northern CT accounts. He works with other PPG staff members to maintain these accounts and his role involves doing inspections, painter training and audits, as well as having quite a few teas and coffees!

David commented: “I’ve always loved my job with PPG but it wasn’t until March 2016 when I was diagnosed with cancer and off work for 10 months that I realised how much I enjoyed my job role and missed the friends I have created within PPG, as well as within the Industry as a whole. Now I’m fully better I am back at work and back to enjoying every single day!”